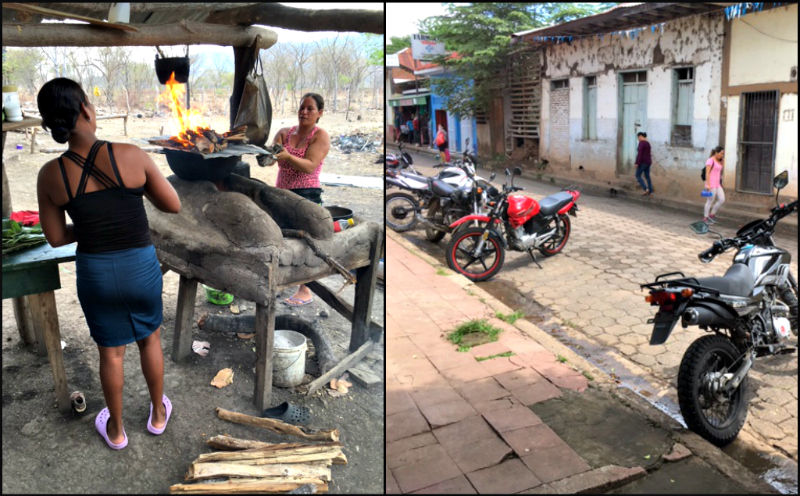 Nicaragua is one of the poorest countries on the continent. Although poverty has decreased somewhat in recent years, the differences between the rich top layer and the large middle class are unimaginable, let alone with those who belong to the poorest layer of society. This blog gives an outline of what life is like for many Nicaraguans.
The Ruach community is located in Juigalpa, a provincial town of about 80,000 inhabitants. The town has two traffic lights. Traffic has gradually increased in a city which was not designed for heavy traffic. The streets are so narrow that allowing parking on both sides would leave very little space for through-traffic. City buses in particular often face difficulty turning corners.
Nonetheless, having a car is still quite a luxury in Nicaragua. According to a research agency 11% own a car, 22% have a motorcycle. The majority of owners do not own their car outright, but are tied in to paying in instalments which, given a certain interest rate, makes owning a car expensive. Most cars are financed from monthly remittances, i.e. money sent by a family member who has immigrated to the United States or Spain (the most popular destination countries). Remittances generate a lot of foreign exchange for Nicaragua.

Family abroad
The majority of Nicaraguans have a relative living abroad. Before 2018 emigration was largely driven by economic reasons and the search for better opportunities to make a living. Since 2018, when political unrest started, many Nicaraguans emigrated because they no longer felt safe in the country due to repression. The situation has got worse recently which has caused a new flow of people to leave the country.

Salaries
By law, the minimum salary must be reviewed every six months by the government, unions and entrepreneurs. According to calculations, an average family needs at least 15,300 cordobas (about $430 USD) per month to live a modest life. We pay staff of our community home around 7000 cordobas per month, which is not a bad salary. For example, a teacher earns around 8,000 cordobas, a security guard earns 5,000 cordobas and a house helper worker earns around 4,000 cordobas.

Statistics
The national institute (INIDE) also provides the following statistics which define prosperity and living comfort : 44% of people have a refrigerator (although we live in a tropical country), 40% have cable TV and 27% have internet at home. 13% of households have a computer, 16% have a washing machine and 1.5% have air conditioning. 86% of the families have at least 1 mobile phone. 58% of households cook on gas, 40% still cook on wood! These statistics will give you some idea. Nicaragua has become a consumer society which leaves many Nicaraguans live in precarious conditions.