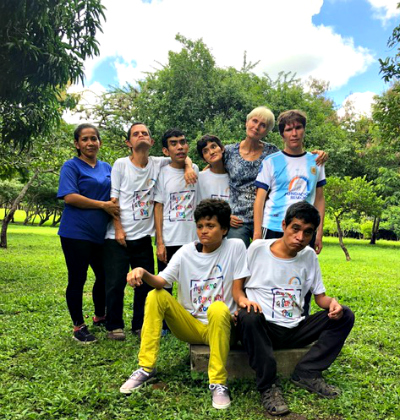 In our last blog we let you know that not all was well n Juigalpa at the residential community. See the blog from the Vivir Juntos board. More from Astrid in this blog.

Since the Ruach Foundacion was created in 2015 it has functioned with virtually the same Board. This is not healthy, especially as it lacked skill and drive to be engaged in fund raising which would have given the Foundation a solid foundation. I tried my best to get new people appointed on the Board at the elections in August 2021, but to little avail. My expectations regarding the performance of the new Board were not high. My fears proved accurate: the ‘new’ board was not able to fulfill its part of the obligations which were agreed with Vivir Juntos. Consequently, VivirJuntos, finally after many emails back and forth, took a well-considered but difficult decision in June to stop sending money to the Ruach Foundation as they had been doing over many years. As the Ruach Foundation is not able to raise its own funds, it is very vulnerable and it could go down at any moment.

The Ruach Foundation has kept very quiet since June. At the end of July I went to the beach with Jonathan for a few days. Then developments started to accelerate. The Board met and called the General Assembly. Upon my return from the short holiday, I was invited by the Board to a ‘meeting’ at which I was told I was fired because the Foundation had nearly run out of funds. This message came to me like a bolt from the blue. Another thunderbolt was that although in Nicaragua there is a legal notice period of 15 days, I was told to move out of the community home within a fortnight. This meant I was without a job and a home, and to top it all, my son Jonathan, one of the six core members of the Community, had to move out with me! Another employee was also fired. Two less experienced staff were asked to continue, as the Board did not want to close the Community Home. The administrator, who is also the President of the Board, and the accountant as well as the employee of the Activity Club continued in their salaried jobs, at least for a period, i.e. up to the time that the funds contributed by one donor, who is a nun and a member of a Catholic sisterhood, will last. So the argument that there is no more money is relative, perhaps an easy reason to put me aside. I suspect that personal interests play a role as the salary of the administrator is guaranteed until November. But the real victims of these decisions are the intellectually disabled core members of the Community home. For them it means abrupt changes in the people who look after them and a reduced quality of care.

My last week as coordinator

I wanted to finish my last week at the Home in a dignified way with all staff and residents. We went on a day-trip to the beach with the core members; we had another outing to the swimming pool and it was lucky that on my last Sunday our monthly trip to a farm was already planned and the core members were able to enjoy another ride on horseback and a delicious lunch.The week ended with a Thanksgiving Service taken by a priest. We could express our gratitude for many years of living together and the many blessings we have had. A good ending!

In my last week at work I managed, with the help of friends, to find a house where I think my son Jonathan and I can feel at home. Other friends helped me starting to move and everything went smoothly and faster than expected. So we have been living there satisfactorily since 14 August. Jonathan will need some time to get used to his new home and living conditions, as expected, because of his intellectual disability and autism. For now I’m taking some time to recover from the intensive last weeks. Fortunately, I have resilience and I can accept life as it comes. Earthquakes in life are sometimes necessary to give something else a chance to surface. The atmosphere within the Ruach Foundation has not been good for a number of years, so I definitely feel a certain relief having left that now behind me. Of course it hurts me, the way my role has officially come to an end. I cry and give the wounds time to heal. Fortunately, I continue to feel inner peace and tranquility, and I have faith in and I am curious about what is to come. And I expect that this will not be my last blog.

If the Ruach Foundation ceases to exist soon, I hope I will still be able to play a role with regard to the Community Home and the welfare of the old core members. Only time will tell. For the time being, I will stay in Nicaragua for a few more months. I sincerely thank you, readers of this blog and donors via Vivir Juntos, for all the support, compassion and love which have helped us to create something beautiful. We have sown, and it was worth the effort! We have shown that it is possible! May gratitude be stronger than mourning!