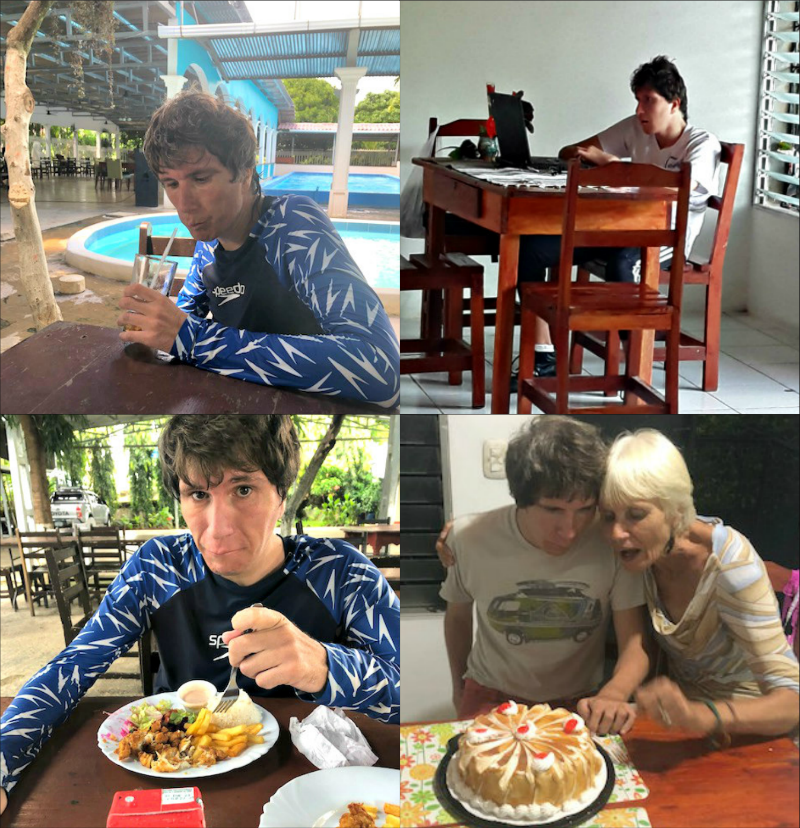 About two months ago I wrote the last blog. That was just after my life was drastically changed, due to my unexpected dismissal, and Jonathan’s and my forced departure from the community home. So here is an update!

I’ve had many heartwarming, compassionate emails. And also some financial gifts to soften the bitter pill we had to swallow. That compassion touched me deeply and I am very grateful for it. Together we worked to create a better life for people with disabilities in Juigalpa. We also worked on raising awareness among the population. It has been very meaningful!

Our new life
From the moment we moved into our new house, we felt at home there. The house is centrally located, close to the shops and the market. And also near the optician shop which I own and which I visit daily to support the staff there.

And life fills itself. Just the fact that I am now a housewife again, with all the tasks that come with it, such as washing clothes by hand. I enjoy being able to cook my own meals again, and I am now the sole person responsible for Jonathan who demands a lot of energy at times. Funnily, I now need to consciously speak Spanish with him, because in the Home I spoke to him in Dutch. But I am pleased it has turned out surprisingly easy to switch from living in a community house to being together with only Jonathan again.

Jonathan
For Jonathan the move has its advantages: there is more peace in the house, more routine and therefore more clarity in his life. Whenever possible, I continue the activities he used to have, for example twice a week having ‘quality time’ with a friend, although this now entails a tough walk of fifteen minutes there and back. We also keep going to the pool, with the added bonus of eating fries, which he enjoys, and of course we never miss out on a visit to the ice cream shop. It is also striking that he no longer wants to do certain activities which he did a lot of in the community home. But he does look at the photos of his life in the community home with the other housemates.

Jonathan cannot express how he feels because of his limitations. At first he cried sometimes. Since last week he has been mentioning the names of Daniel, with whom he had a special bond, and Loyda. And today he was on the look-out for them. This is gain, because you have to work through grief. However, he has had more epileptic fits since we moved. Sometimes he throws a tantrum, and then I have to isolate him in the garden for a while, so that he can come to his senses again. Hopefully time will heal his wound.

And I…
There is much to be thankful for. I get a lot of inner peace from my daily meditations; I live in the NOW; my counselling work, on average 5 times a week to people who ask me; Jonathan’s bear hugs; my contribution to the Mira Mira optician shop; expressions of compassion; my faith in the future.  And being in a country where there is a lot of injustice, sharing the experience of poverty and the abuse of power feels like a small sign of solidarity with the Nicaragua people.

The Fundacion
I have lost contact with the Ruach Fundación, but I do know that the activities in the home and in the activities club continue on a modest scale, but with fewer and less well-trained staff. I’m glad I do not know much, because I have little faith in the quality of care at the moment.
Comments from our former neighbours reinforce my impression: there are no visitors coming to the house anymore; the neighbours no longer hear singing (we had half an hour of singing in the evening, which was a moment of prayer); they don’t go to the pool anymore; Daniel with a member of staff no longer buy tortillas for breakfast next door.
The attitude of the Ruach Board, especially the President, is the opposite of inspiring. I hear bits and bobs from time to time. For example, the week after I was fired, they celebrated the Foundation’s 6th birthday on a modest scale. Afterwards I heard from a participant that it was publicly said that I was invited but could not come. But the truth is that I was not invited at all. It is incomprehensible to me that certain people would want to spend their energy by gossiping and lying. It shows how things are at the moment. I wonder about it, but have to leave it for what it is.

What is next?
Lately I’ve been busy creating an option for a possible new home for the five remaining core members of the Ruach Community Home should the Ruach Fundación eventually collapse. I feel I have sown where I could, and now is the time to wait and see if it will yield a good harvest. Fortunately, in anticipation of possible fruits, the Dutch Missionaries Week has agreed to support my stay in Nicaragua until at least the end of this year.
Time will tell where we stand.