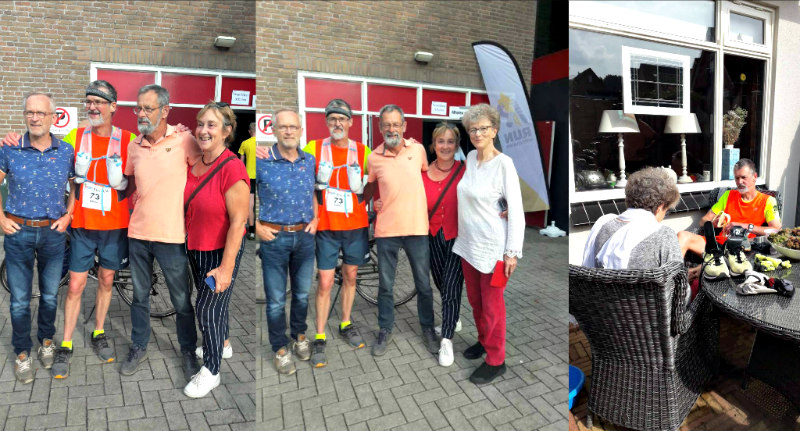 Eric’s plan to raise funds for Ruach with his 10 September Run van Winschoten, in his hometown, was thwarted by dramatic developments in Juigalpa, Nicaragua when the relationship between the founder of the Ruach Foundation (Astrid Delleman) and the Ruach Board broke stranded in a financial crisis. However, as he had signed up for a 100 km event, he decided to go ahead with the run anyway. He reports:

“This day also did not quite go according to my running plan because of an undiagnosed minor, but persistent injury of my right heel. This meant I had not run much since the beginning of July, and I was unsure whether my initial goal of running 77.3 km (which would have been the age of my wife in years on that 10 Sep 2022) was going to be possible. And I proved right.

The 100 km route consisted of 10 loops of 10 km around the town. But after three loops my pace dropped, and my injured foot was getting hot, and I had to make a ‘pit stop’ at my brother’s home to cool my feet, put on dry socks and try another pair of shoes. It did not alter much. I never got into any kind of rhythm and a strong desire to walk rather than jog or run even. Two loops later a 2nd pit stop was needed and soon after that I decided to call it a day at the 60km point, after which I did some walking against the route with members of my family to cheer on some running mates I’d met on my way. I ended my day having done 66 km, still fresh enough to enjoy the remainder of the day with my siblings and their spouses. The week after the run I saw a sports’ podo-therapist who discovered my heel bone was locked, and then I knew it must have been locked for many months. He manipulated it back into its normal position.

Before this run I invited readers to guess how many kilometers I was going to manage on this run. The five predictions were varied from 58, 63, 77, 100 and 110 km, so Mike’s guess, who predicted the 63 km, was closest and took home a kilo of Edam cheese.

It is now more than two months after my run, and I have been in contact with Astrid several times talking about her and her son’s Jonathan’s welfare but especially about the welfare of the 5 remaining core members of the Ruach Community. Astrid continues to receive support from Ruach’s mother foundation Vivir Juntos.

We are hoping and praying that a solution will be found to put the Community Home on a more solid foundation.

My best wishes for a blessed for Advent and Christmas for you in these very challenging times for so many people all over the world.