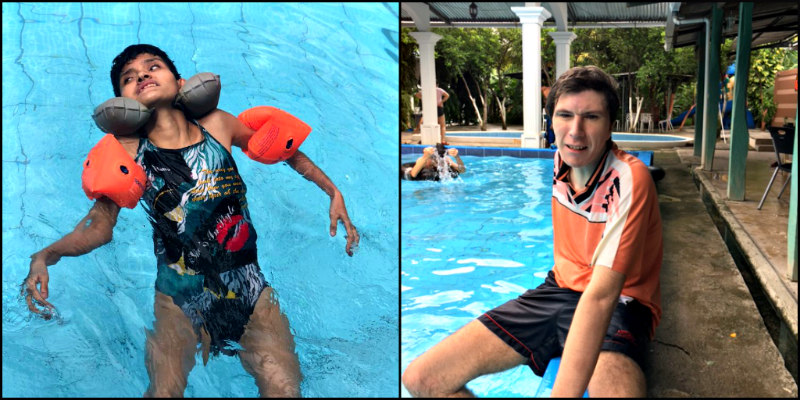 While the people of northern Nicaragua watched the hurricane pass, with houses collapsing, trees falling and rivers bursting their banks, the rest of Nicaragua suffered unprecedented levels of rainfall for several days.

Relief work started late due to inadequate government action. The emergency centre shelters could not quite provide what those affected needed, causing more suffering than necessary. But it brought out the best in many people who did their best to alleviate suffering for the most affected. “Today for you, tomorrow for me”, is a famous saying here

The latest news from our community home
The corona virus storm in Nicaragua seems to have subsided somewhat. This means that in October we were able again to resume, after six months, our weekly outings to the swimming pool for the therapeutic exercises in water for our core members. We use private transport and go early in the day when there is hardly anyone else in the pool. Everyone enjoyed being back in the pool, although Miguel and Manuel needed a bit longer to feel comfortable in the water again. We are fortunate that both our friend who owns the small van which is used for our transport as well as the owner of the restaurant outside Juigalpa on whose premises the pool is located, keep providing their services free of charge.

For now, we are lucky. However, we remain very alert to the possibility of a second wave of the coronavirus coming to Nicaragua.
The dancing at our community home, which we introduced when we could no longer go to the pool, has now become a fixture in our weekly programme (Fridays, 9:30-10:00 am) as all residents of our home enjoy it so much. They swing particularly well on music by Shakira and Dimension Costeña!

Personnel changes
Quite unexpectedly we had two staff changes at our Home in October. One home care assistant Sayra left because she was offered other work which had certain advantages for her. And Ana, who lives in our community home, has such a complicated pregnancy that she has been off-work quite a lot. Her maternity leave will officially start at the end of this month, but she is not expected to return after that.

So at the end of October we were understaffed, with the two remaining home care assistants Carmen and Scarlet and myself having to fill the gaps in the roster left by Sayra and Ana. This caused unrest in the house, especially for residents like Jonathan who needs peace and regularity because of his autism. It was very hard in the two weeks before interviews for new employees took place.

Miraculously we had several applicants. In the period before the interviews I had invited some applicants to spend an hour with us to taste the atmosphere and to see what the work more or less consists of, because working with people with intellectual disabilities is virtually unknown in Nicaragua and and few applicants have any idea what to expect, what is expected of them, and whether they are suited to the job.

Fortunately, our ‘old’ employees, Scarlet and Carmen, have risen to the challenge. They have grown in their role and accept more responsibility in their work. So our core team is getting stronger. Very valuable! So life in the community home is moving from one challenge to another. We face the challenges full-on, we learn and grow as people, and this means that we are more and more able to provide a stable foundation at home for our core member residents. Isn’t that great?