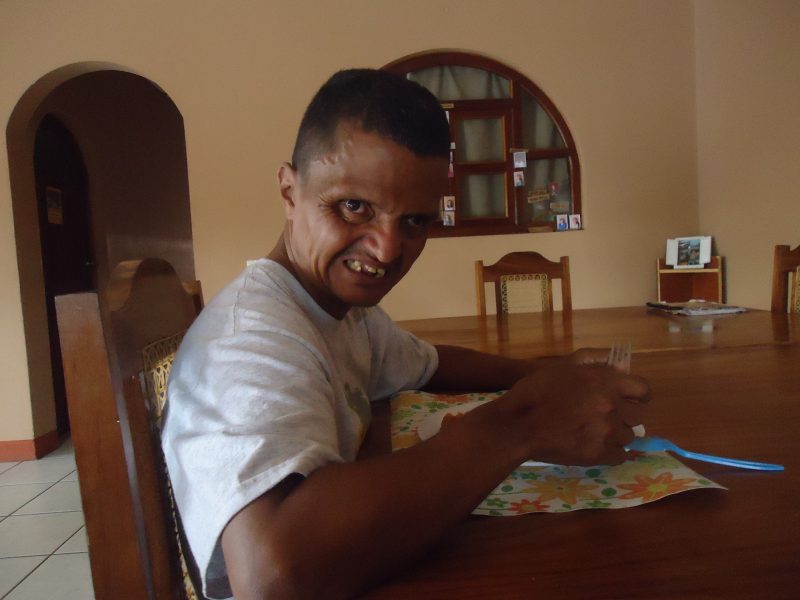 There are visitors at the door: Alfredo, a young man of just over 30 and his uncle Jose, in his early forties. Today is the third time that our future new housemate Jose visits us to get used to his new living environment.

It will also give us time to gradually get to know Jose. After a somewhat tedious period during which Jose’s family did not keep to the agreed arrangements regarding the customising visits, Jose’s visits are now more regular. The visits become longer and without accompaniment as time goes on.

Alfredo
Alfredo knows Jose very well. Alfredo used to live for many years with his grandmother, Jose’s mother, after Alfredo’s own mother and his sister left him behind about 30 years ago to illegally move to the USA in search of a better life and a higher income to support the family in Nicaragua. This often happens in Nicaragua, and as a teenager Alfredo himself also made the illegal move to the USA with his sister and aunt with the ‘help’ of people smugglers. This took them bags of money and his sister and aunt were nearly raped, but finally Alfredo was reunited again with his mother. Alfredo never got a residence permit and years later he was caught by the USA authorities and sent back to Nicaragua. That was some years ago and Alfredo now earns his living as a hawker selling his ware on the streets.

Many Nicaraguans have one or more members of their family living in the USA, Costa Rica or Spain. Many cross the border illegally and try to eventually obtain legal status. This is a very uncertain existence. But nonetheless, a big part of Nicaragua’s income consists of remittances sent by Nicaraguans living abroad to their families back home.

Jose
Up to five years ago Jose had a good life. He lived with his mother who looked after him well. Among his brothers and sisters three left for the US and only one brother, a lawyer, stayed in Juigalpa. Jose attended the special needs school in Juigalpa for some years. He excelled in running and won several medals!
But everything changed when his mother died. He took up residence with his brother who had his own family by then. The care for him was such that Jose spent more and more time out of doors on the streets. There were nights that he couldn’t sleep at home and had to resort to sleeping outside. His sisters in the US sent money for him and tried to ensure that Jose would be better looked after, but to no avail. Jose became a well-known personality on the streets of Juigalpa. People offered him alcohol, taught him how to smoke or otherwise abused him. Nobody protected him from this abuse, partly because there were no alternatives.

But now there is an alternative. And that is why Jose, popularly better known as Chepito, will become our 4th residence after we move house later this month. His sisters are over the moon, but his brother less so, which is the reason why it took the sisters a lot of effort to persuade their brother to agree to the move which as a result got seriously delayed.

But where there is a will there is a way. And Chepito’s vists to our Ruach home made it clear that he is keen to join us. And we think that we can offer him enough of what he needs and that he fits in well with the needs of Daniel, Loyda and Jonathan. Therefore, meet Chepito in the picture!

So in fact this blog is an announcement of our extending family! The process did not go as planned and we are behind schedule, but this sort of processes cannot be forced. And in the end it is miraculous how the right people come our way. It remains a matter of living life in wonder and with grace!