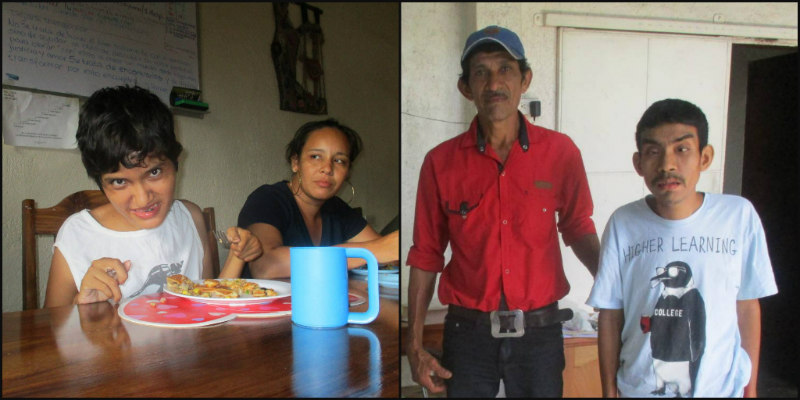 Manuel and Maria Helena, our new resident core members have been with us for six weeks now. We used the first weeks to observe and get to know them as well as we can. We then write a written assessment and a work plan for the next six months. We had just finished the report when their father had the opportunity to embark on a long journey to visit his children.

We are really satisfied with how well they have adapted to life in our community home, and also their father was well pleased to see them happy in their new home. The father lives in a remote area of San Carlos. He is a subsistence farmer who can only just make ends meet from his harvests. He arrived with two sacks of beans, rice and plantains as his contribution to the expense of running the home. He’d carried those bags all the way, assisted by his second wife.

Our main worry is that Maria Helena and Manuel besides being intellectually challenged also have limited eye sight. The father confirmed that they had never had their eyes investigated, but was pleased that we would like to have their sight investigated and said he would try to contribute to the cost of the investigation through sale of part of his March harvest.

Eye investigation
We had hoped that in mid-January a team of eye doctors from the US, was coming here as it would have offered us an opportunity to have Manuel and Maria Helena undergo a good eye investigation and access to cheap glasses. We had registered them in good time. But unfortunately, due to the increasing criticism of the OEA, EU and US about the political situation in the Nicaragua, the visit of the eye doctor team was called off.

It would have been a long wait to wait for the team’s next  visit next year, so I made some casual enquiries about which eye doctors have a good reputation in Juigalpa. The information I got was consistent, so I decided to see him to get acquainted and to ensure he has what it takes to work with people wth an intellectual disability. Our meeting was positive and in the meantime Maria Helena and Manual have been checked by Juigalpa’s best eye doctor who normally charges $ 15,- US for a consult. When I requested a reduction, he said the consults were free of charge. Miracles still exist!

However, the results of the investigation were not hope-giving. He concluded that before their birth during their mother’s pregnancies something has gone wrong which has caused a serious impairment of their sight, and it cannot be treated. Nor can special aids be used to improve their sight.

So we are left with the task to work out what they are able to see at varying distances, and to take that into consideration. The challenge now is to give them a chance to gain as much control over their life by supporting them only in the most necessary situations. We’ll keep you posted about their welfare.