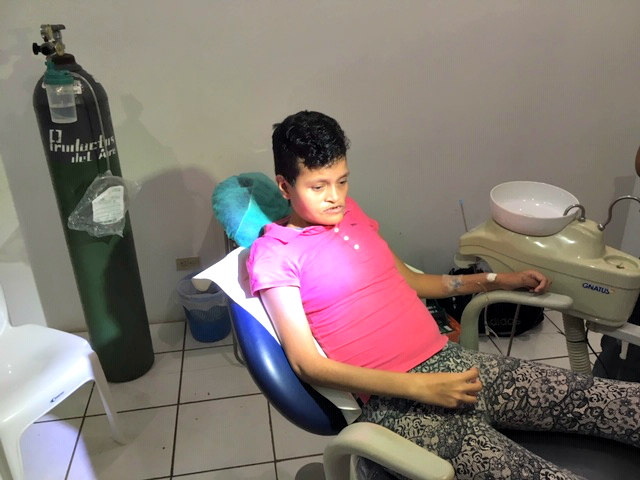 The majority of people with an intellectual disability, including our core members, have never seen a dentist.

This is not because they have such excellent teeth, but simply because from early on in their lives they never received the same dental care as their family members, no doubt partly because they were not able to indicate when they suffered toothache. Moreover, there are very few dentists who feel capable of handling intellectually disabled persons. So we should count ourselves lucky that the teeth of Daniel, Miguel and Manuel look quite good. Unfortunately, the teeth of Maria Helena and Loyda look less strong, and at their relatively low ages they are already missing several molars and incisors.

Bleeding gums
For several days Loyda was suffering from bleeding gums. We asked her mother, doña Yolanda, to take her to the dentist in the hospital which treats patients free of charge. She came back quite indignant: the dentist had not even looked into Loyda’s mouth and had told her to use a spray to stop the bleeding and to return after one month.

Through a doctor couple, who happened to be on a visit to Juigalpa to get to know our Ruach Foundation, we got the address of a dentist relative of this couple with whom we were able to make an appointment for a check-up three days later. Private dentists have their own practice and their own prices, but dr. Baez, the owner of the Christian Dental Clinic Mana, offered us a reduced fee. So we went, including doña Yolanda. Of course it was difficult to get Loyda to open her mouth wide and long enough for the dentist to properly assess Loyda’s dental status. Loyda had an infection caused by a bad tooth and her teeth needed a thorough clean. Treatment would be easiest if it could be done under a general anaesthetic. So a plan of action was required, because treatment under a general anaesthetic requires the presence of two dentists and an anaethesist and a bottle of oxygen. We were not charged for this visit, and also we came home with a special toothbrush and a spray to alleviate Loyda’s pain to some extent.

Costs
Step 1 was to order a blood test for Loyda at the local lab through our doctor-friend. The blood test indicated it was safe for Loyda to have a general anaesthetic, so we could plan a date for the treatment. Step 2 was to deliver a bottle of oxygen from the doctor’s practice to the dental clinic. A female friend was happy to do the driving, but who would have thought an oxygen bottle could be so heavy (see picture above)? We were lucky enough to have manpower around at the right moment for loading and unloading…

So last Tuesday Loyda was back in the dentist’s chair, surrounded by two dentists, dr Baez’s wife, the anaethesist, doña Yolanda, and myself. Before starting the procedure, we got dr Baez on the phone. He was in the US for a week, but he made sure everyone and everything was in place for this procedure: his colleagues who agreed to work free of charge, and the oxygen bottle from another doctor also made it available to us for free. Dr Baez prayed on the phone and asked for a blessing for the operation. It was a special and moving moment which was followed by a one-hour operation.

I had not thought of the transport to get Loyda back home, so I had to arrange this on the spot. But again, ‘good befell us’: Jorge collected her in his car. And because he is also a doctor, he stayed to give Loyda her injections (anti-biotic and pain killer) which we had bought in the local pharmacy. Jorge came back the next day to repeat the injections, saving us the trouble and cost of finding a nurse to do this.

What’s next?
Loyda is still recovering. Three molars were pulled out and her mouth was cleaned quite thoroughly. She slept the first night sitting upright to avoid the risk of choking. For days she only wanted to drink, was tired and weak. Gradually she starts taking solid food again, but she is not yet back to her ‘old self’.  As icing on the cake, the owner of the pharmacy accepted our written request to donate to us the gel that promotes Loyda’s recovery; just another example of together making a difference and t life being full of surprises.