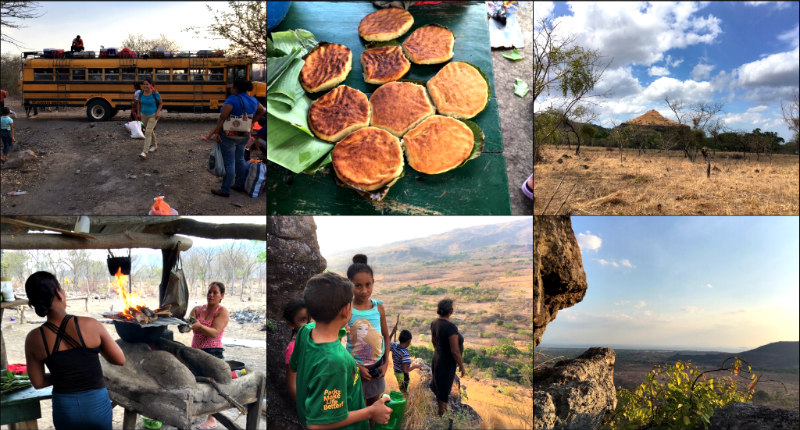 At 1 pm Ana and myself were at the starting point of the bus for our journey to Arayan. Hoping for a good seat we thought we had arrived early, but the bus was already very crowded. No surprise as there is only one bus a day. I and one other person were the only travellers with a face mask.

Arayan is a place in the deep rural areas around Juigalpa. Ana, a colleague, had invited me to join her on a visit to her parents-in-law, a 3-hour bus journey from Juigalpa with many stops on the way. We left on a Saturday, and I returned on Monday morning on the back of her boyfriend’s motorbike I’m always keen on new adventures.

The home
Like many smallholders in Nicaragua, Ana’s parents-in-law do not live a life of luxury, quite the opposite in fact. The roof is corrugated iron sheets. The outside walls of their house are planks of wood. The entire inside is partitioned by curtains to create four small rooms, each with a bed. Clothes are hung over a rope or stored in bags. And that is about all, except for the luxury of a television and two lights, the electricity for which is generated by a solar panel.

The kitchen is outside under an awning held up by poles. Water is drawn from a well, which fortunately also has water in the dry season. Their wood-burning fire place, built on a table, is made with clay and earth (see picture). There is plenty of wood in the area where they live. Their neighbours are near enough, but out of sight. The bathroom is a structure of plastic on 4 poles, as is the toilet, which only has a hole in the ground with a lid. People wash themselves using a bucket of water.

A world of difference
Having had brief contact with a less affluent way of life makes me reflect on what is really important in life. My hostess is 56 years old, has never been to school and has always lived in a peasant society. When she was 19 years old, she eloped with her husband. They had 12 children, 10 of whom are still alive. Only one child still lives with his parents; he has an intellectual disability. She enjoys the visits of children and grandchildren. She is clearly the matriarch in the family. Today her husband left early to find grazing for their 15 cows, which is quite a task at the end of the dry season.

Creative
No matter how primitive their living conditions, people get used to it. Daily life means making sure that the basic needs are met, which requires a lot of time and effort. Their world is the neighbourhood, the people around them. Often they are creative in doing a lot with the little they have. For example, the daughters, who were also visiting this Saturday, wanted to bake cakes but there was no oven. But hey presto, they took part of a corrugated iron sheet used as one of the walls of the toilet, sawed it in half, borrowed two large pots from the neighbours, placed them on the fire and then on top of the pan put the iron sheet loaded with embers and burning wood. It worked!
The hospitality was great too. Is there not a bed for everyone? Beds can always be shared. Or you can put a mattress on the floor. I had the luxury of not only a bed, but also a bed to myself.

Paveljoen
On Sunday afternoon my hostess (in slippers), her three grandchildren and I climbed Paveljoen hill. The hike was only 30 minutes, less than expected, but it was hard and steeper than anticipated. I did not know there was no real trodden path, so it was a matter of ‘keeping going’, no looking back and staying in the moment. The kids of course ran up the hill as if they were mountain goats.  But the fantastic view from the top made it very worthwhile. What a vast expanse. I enjoyed the moment, and did not even think about the journey down, which actually we were able to do safely and without much effort.

Life
It was a weekend full of impressions and experiences. I was immersed in the beauty of nature, and far away from news about the corona virus which does not feature here. You can only live in the NOW, the life presented to you, and try and live that life in faith. That is not always easy, but it is worth the effort. This weekend gave me some good opportunities for practising!