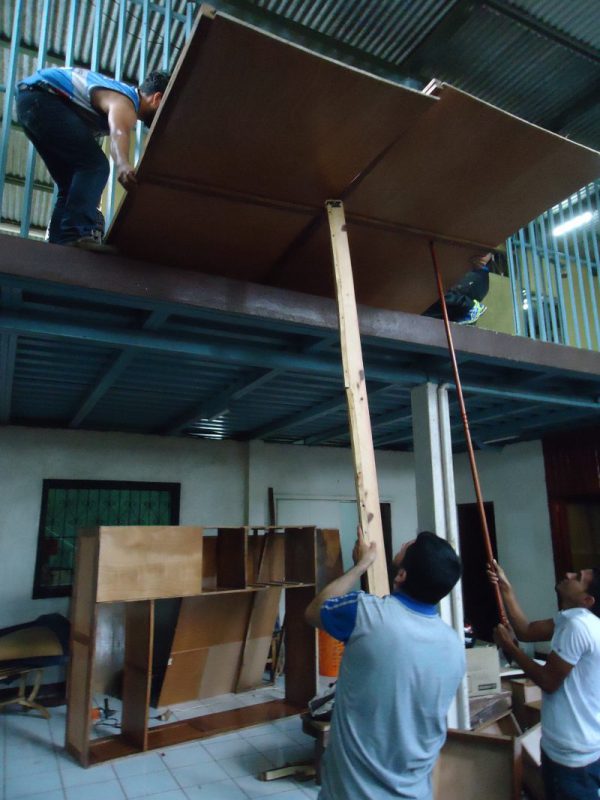 It’s 8:30 a.m. The moving van has arrived. The young men whom we had asked to help us are also in good time. But the carpenter in charge of removing the big cupboards in the bedrooms is late.

Today, 15th of July, is the day we will finally move to our new home. In the week leading up to today we have already moved some items using a vehicle belonging to a friend as our new landlady had kindly allowed us to store our belongings in one room in the new house.

There are no removal companies in Juigalpa, so it is up to us to organize everyone ourselves: finding cardboard boxes (not for sale here!), a van, a person who can drive a van, as well as people who can help us lift and lug our belongings. Everything is done with ‘human power’ without the help of machines that can lift heavy items ( e.g. a washing machine, refrigerator or oven) onto the van.

Loyda, Daniel and Jonathan
Also David is in good time. He will collect Daniel, Loyda and Jonathan for the day and together with our staff Carmen and Heydis take them to a small farm to spend a quiet day in nature. They are familiar with the place as they have been there before which increases the level of enjoyment for them. At the end of the afternoon they will be collected from the farm and taken to their new home.

House moving experience
Generally speaking people here do not have a lot of experience in moving house. My survey among our Ruach staff shows that on average people have moved 2 to 3 times. The ideal here is to own your own house, no matter how small and deficient, which encourages people to stay put where they are. Fortunately I’m quite an expert mover. My last move was from Leiden in the Netherlands to Juigalpa nearly two years ago when I had to totally clear out our house of many years. In comparison this move within Juigalpa over a short distance is ‘a piece of cake’.

It was inspiring to see Enyin, Alvaro, Carlos and David at work. They worked hard and were creative in finding solutions. For example, when the carpenter did not manage to move the cupboards from the second floor and was about to cut the cupboards into two pieces, they came to me indignantly and told me this was not necessary and that one of them had a friend who would be well able to do the job by simply dismantling the cupboard. And so it happened! As the picture shows, in the new house the cupboards were assembled again on the top floor which required some inventiveness. But they got it done!

All is well that ends well
We got delayed by the problem of the cupboards, but by 5 pm everything was moved and most items had found a place in the new home. Of course we had planned beforehand what had to be put where and who would be sleeping where etc. Fortunately nobody had difficulty sleeping in a different environment for the first night!

Daniel and Loyda show little emotion how they experience the move. Jonathan is more expressive as he misses something from the old house and has his tense moments. We are alert to this and try to help him get used to the new circumstances. The cupboards were assembled the next day. And of course we have been busy ever since putting the dots on the “i’s”, and we’re pleased with the result. We feel at home in our new house!