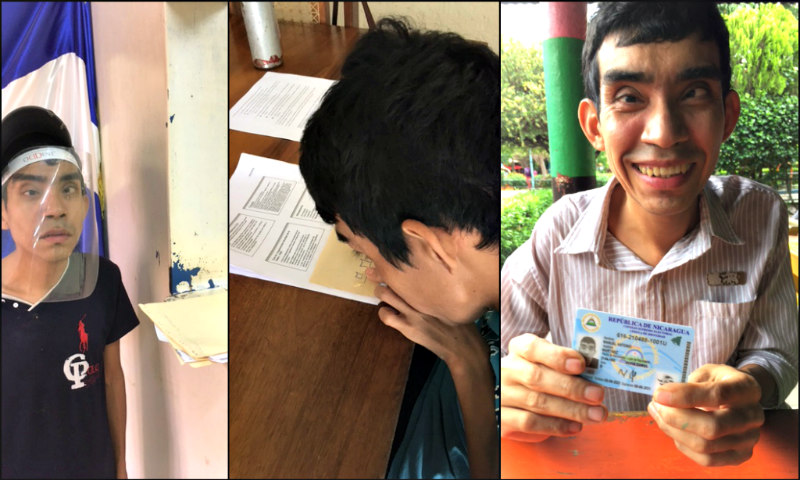 The Ruach Foundation is trying in its own humble way to improve the rights of adults with intellectual disabilities. An example of this is our efforts to make sure one of our residents, Manuel, will be granted ‘his right to exist’ by getting him an Identity Card (ID). When he was born, he was not registered in a population register, which means he legally never existed.

This is quite common in Nicaragua, especially if people live far away from the application centres as Manuel’s family did, living somewhere in the deep interior. Many youngsters get registration during childhood, but in the case of Manuel, who is already 32 years old, this never happened.

The long road to legal existence

Two years ago Manuel and his sister Maria Elena came to live with us. She had a birth certificate, but he didn’t. So it seemed to me a necessary step to get Manuel legally registered. I went with him to the office of the Procuraduría de los derechos humanos (the Human Rights ombudsman), two blocks away from us, expecting that they could help in this case. But not so. They referred me to the Population Affairs Office in the City Hall. They gave me a long list of documents that I would have to collect to get Manuel registered. It seemed an impossible task. And that was two years ago…

Since then we have used all our creativity and perseverance to get Manuel registered. A lawyer from the Supreme Electoral Council helped us further along the way by getting Manuel’s father to sign a paper saying he had sole rights over Manuel, as the mother had passed away. This meant we could scrap a few documents from the list.   Home visit The start of the procedure was to have the police confirm that Manuel was alive, through a home visit. Armed with a letter from the Police confirming this we had to go to the Supreme Court. Unfortunately my attempt to file Manuel’s case as his current carer (and therefore his representative) was rejected by the judge. So what’s next? Manuel’s father still lived far away in the interior and could hardly be reached by phone. He was willing to collaborate, but he was also busy with his own life, so that his cooperation in the entire procedure was virtually nil.

I made another visit to the Human Rights Ombudsman, and this time the visit was more fruitful. They helped me find a lawyer who was willing to take on Manuel’s case. She charged a fairly large fee, but according to her this was only about one third of what the case was really worth. Knowing that it wouldn’t work without her help, we went along with her proposal. It was now November 2020.

In March the attorney presented Manuel’s case to the Supreme Court. In the meantime we had taught Manuel how to sign a document. Although he cannot read or write, we managed to teach him to write his initials MM (Manuel Martinez), so he could officially sign for the first time for the application to the court. In due course we were told that Manuel and two witnesses (employees of the Ruach Fundación) had to appear in court. However, once in court his father’s power of attorney for Manuel’s lawyer proved insufficient. The judge ordered that the father himself had to be present! So the trial was adjourned. The lawyer did everything possible to get in touch with the father and she succeeded. The trial happened and two weeks later we got positive news: the judge had given permission for Manuel to be entered in the registry of births in his current place of residence: Juigalpa! On the strength of the birth registration, I took Manuel to the Supreme Court where he could apply for his ID card like most Nicaraguan citizens.

Celebration!
Today we collected Manuel’s ID card. For me personally this is one of the greatest achievements I’ve had as a coordinator. But it’s not ‘my success’. I depend on the people who came my way and who were willing to walk with me for a while. But they were there! It is so important to try and achieve things together.
On the way back home we treated Manuel to a drink with a nice pastry. What a party! It is clear that miracles still happen.