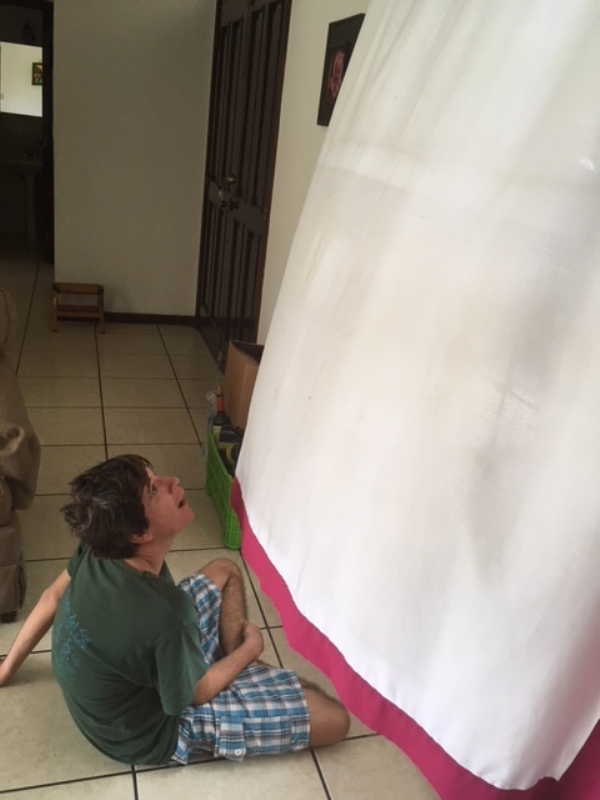 And there´s Jonathan back in familiar territory, after 3 months, enjoying the waving curtain in the room of our Finnish friend Sanna in Managua.

Many autistic people have very specific routines, and from an early age Jonathan loved waving flags or curtains. It relaxes him to watch this happening.

Because Jonathan has got autism, which means having limitations in his social functioning, he is not really a community person. Of course we take that into account in his daily life, but it is inevitable that living in a community will be stressful for him sometimes. It is good for him to have an occasional break from community life and I plan regular outings for him. See the smile on his face in the picture!

Due to the situation in Nicaragua we have not been able to travel to Managua in recent months. The protests against the Government started mid-April with demonstrations followed by road blocks around many cities in the country which prevented free movement of trucks and other vehicles which put increased pressure on the Government. This proved to be an effective tool, because on the few occasions that protests and Government met for the ‘national dialogue’, the first demand of the government was always that the road blocks needed to be cleared.

So has the peace returned to Nicaragua? The answer you get depends on who you ask. In de Volkskrant of 20th July it is nicely put: ‘The president and his followers appear to live in a parallel reality. For several months fear has ruled the country, but it is especially Ortega who sows terror’. The Government’s stand is that ‘thanks to God peace has returned’, but according to de Volkskrant Ortega’s interpretation of the reality does not receive much support outside his own circle. International human rights organisations have condemned state violence in harsh terms.

But the protests continue, for more than 100 days by now, in spite of the people who have been wounded, disappeared, tortured or sacked, such as doctors who have offered medical care to civil protesters.

When I left with Jonathan for Managua I said to Ruach staff: ‘Probably till Wednesday’, because life has become even more uncertain in Nicaragua in these days. We cannot control life (although we sometimes think we do) because we will never have all the pieces in our own hands. We are even more dependent on circumstances now. Are we in danger? As a foreigner I am not allowed to be politically active, so I’m keeping a low profile. But if by chance you find yourself in the wrong place at the wrong time, the impossible could become possible in Nicaragua.

Life goes on. My attitude is: do whatever comes my way, and do that well, with two feet rooted in Nicaraguan society. And take time for meditation and silence, to stay tuned in and feel the Source.

We keep counting on your involvement and support!