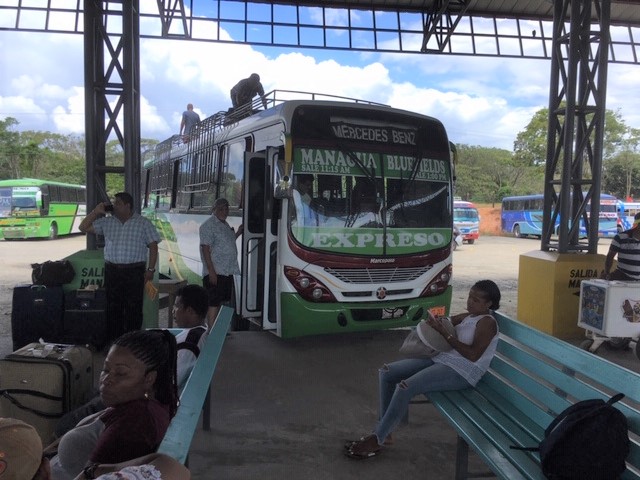 Here I am back to my desk after three days in Bluefields, a small town on the Atlantic Ocean called after a Dutch pirate Abraham Blauvelt who used the bay as his hiding place in the 17th century.

Until recently Bluefields could only be reached by coach to Rama followed by almost a day’s journey on the river. But now there is a tarmac highway and Bluefields is only 5 hours from Juigalpa.

Getting to know Romel
The purpose of my journey to Bluefields was to get to know Romel, a young man with an intellectual disability, and to assess his situation. We got to know Romel’s family through an old people’s home in Juigalpa to which Romel’s uncle was recently admitted as there is no care home in Bluefields. They asked us whether Romel could come and live at Ruach. In principle our home is full at present, but we do not like to give a definite ‘No’ for an answer. We were told that Romel was relatively independent, so we argued that if this proved to be true and Romel were to fit in with other members of the community home, we would be open to admit him as our 7th core member.

Assessing the family situation
So I planned to have days away, but left the rest open: I could only travel if there was a seat available; I would sort out my accommodation in Bluefields upon arrival; and I would also play the return journey by ear: the Nicaragua way. But the journey turned out to be a sequence of pleasant events. There was a free seat on the bus, and on the journey I was able to call one of Romel’s relatives, Don Hernan, who was waiting for me at the bus station in Bluefields and took me to Romel’s aunt with whom Romel had lived since 2017 after his mother died. (Romel’s father never played a role in his life). But Romel’s aunt aged 84 could no longer care for Romel, and therefore Romel moved back to his parental home, looked after by a cousin, only as a temporary solution as the cousin himself has not got a stable past.

I was warmly welcomed and invited to a delicious lunch straight away. Did I want to spend the night with the aunt? I gladly accepted as it seemed a good way to get to know the aunt better and indirectly learn more about Romel. I spent the night on a spare bed in her room, a big sign of hospitality!

Romel
I tried to learn more about Romel and to get to know him: through open conversations with the aunt and Don Hernan; by visits with Romel to his home where I could observe what he did and did not do; and by making contact with him through a visit to the church, etc.

Romel is indeed fairly independent. However, he is very passive (lack of stimulation), and walks poorly (lack of exercise). What was more worrying was his behavior, which I was told about, partly reinforced by an inadequate way of handling him. Would we at Ruach be able to cope with that?

Arrangements made
Romel was keen to visit me in Juigalpa, so we fixed a first short visit for mid-March. We also planned a second and third visit of increasing duration, which we feel is the best way for our core members to gradually get to know Romel, and vice versa, without the pressure of thinking “Romel is here to stay.” That way Romel himself would be able to indicate whether living in the Ruach Community Home would be a good alternative for him. Ruach will assess the situation after the third visit and if possible will then take a decision about Romel’s future with us.
Of course it will cost Romel’s family money and time, but the signs are that it is a good plan. Even Romel’s only brother whom I talked to over the telephone as he lives in the States, is fully behind the plan, contrary to his aunt’s expectations. So we’re all facing the same direction. Time will tell what is wisdom. We’ll keep you posted.