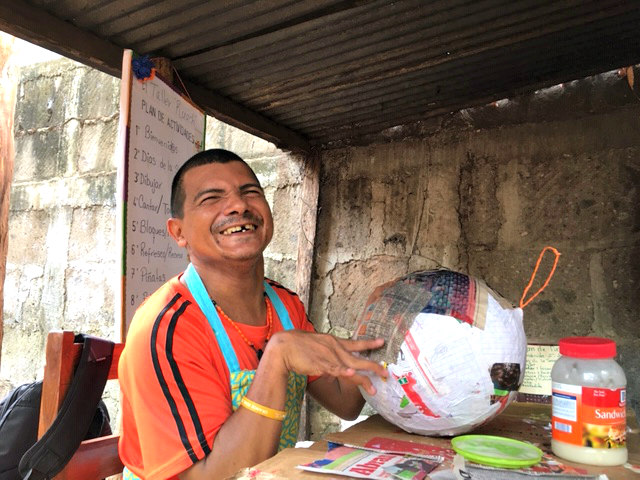 Meet Rommel, our new house mate, whom we welcomed yesterday as 7th core member of our Ruach Community. Rommel is 35 years old and comes from Bluefields, on the East coast of Nicaragua. His big smile shows clearly how happy he is to be with us!

We got to know Rommel and his old aunt in February when indirectly we got a request for him to join our community. To be honest, we’d always assumed we would only be able to accommodate a maximum of 6 core members. But we were told that Rommel could function fairly independently as he only had a lighter form of intellectual disability. So we were open to the request, trusting that this request had come to us for a reason.

Making acquaintance
So in February I travelled to Bluefields to form my own impression of Rommel’s behaviour and abilities, and to quietly talk to the people responsible for Rommel’s well-being. (See the blog I wrote about this trip at the end of February). His situation in a nut shell is that his mother died three years ago; his father had never been in the picture; he has a brother who illegally works in the US; and an 83 year old great aunt with whom he lives who is no longer able to look after him. She tried to get a cousin of Rommel to get involved, but this did not work out.

Observations
I observed that Rommel was indeed fairly independent, although he probably had lost some of his skills through years of passivity living with his great aunt. I saw the main challenge of Rommel’s behaviour to be that, as an only child, he was brought up with lots of attention but without clear boundaries. He came across to me as a rather spoiled young man who could be very demanding. We arranged with his great aunt that Rommel would visit our community three times to see whether he felt at home with us, and vice versa. We also needed to assess whether we would be able to offer him what we thought his needs would be.

Visits
The first visit took place mid-March. We had already arranged to raise a partition in the garage which created a makeshift bedroom. He indeed functioned as expected. Our team were able to work with him, and our core members quietly responded to his presence. Rommel really enjoyed his visit.
His second visit, planned for April, got delayed till mid-May, because we demanded that, due to COVID-19, he would have to travel to Juigalpa by taxi, not on public transport. So last week we were ready for his second visit from Wednesday till Saturday.

During this 2nd visit we got an unexpected request from the great aunt whether, given her declining health and the long distance between Bluefields and Juigalpa, we could speed up the getting-to-know process. In other words, her request was for Rommel to be accepted straight away…. Oops!

Accelerated procedure
I advised her to send a letter to the Ruach Board making her case, which she did. The next day Rommel and she visited the Chairperson, Ana Alicia. There were exchanges between Board members, and of course our house team, responsible for the day-to-day running of the community, was also consulted. The consensus was to accept Rommel as a potential new core member, which meant we could start the admission procedures which entailed doing the paper work, making good arrangements and making Rommel’s bed room more habitable. Therefore, earlier than expected our Ruach family has a new member!

Transition period
So at the moment, Rommel and all community members and staff are now getting used to the new situation. Changes have been made to the staff  working roster to spread the work load, taking into account Rommel’s presence during the coming six weeks when we will observe him closely in order to make a suitable plan for his development. He also has to undergo a medical test, not at a hospital or clinic, but by a medical practitioner who is less likely to have had contact with corona patients.

Today we wrote a message about Rommel on our Facebook page, and I informed our friends by What’s App asking them to send Rommel a message to welcome him to our Community, especially because owing to COVID-19 we cannot receive visitors for the time being. In no time we received 20 responses, which was very heart-warming.
If you would like to add your congratulations, please send me a mail.  Only together can we make a difference!