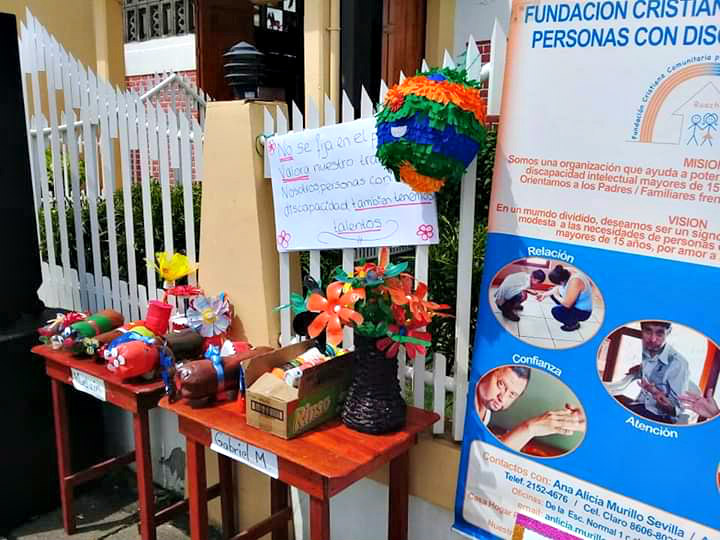 So there I was, with Ana Alicia, the Chair of the Ruach Foundation, waiting for the Mayor in Juigalpa’s Town Hall. Two weeks before we had asked for permission to organize a flea market in the town centre, in the central park in front of the Cathedral, to raise money for our work. We got that permission, black on white, without a hitch.

But yesterday, a day before the planned activity – and we were totally prepared – the permission was withdrawn, because the Municipality had planned its own activities in the park. So no place for our flea market!

Searching
Our visit to the Mayor did not solve anything, and we lost an hour in waiting. So we decided to visit the padre of the cathedral hoping for his permission to use the space beside the cathedral, which is often used for activities, for our flea market. Bad luck, the padre was elsewhere in a meeting and did not answer his phone. It was 8:30 am by now and I had a dental appointment, leaving Ana Alicia behind in a lot of stress. For the last two weeks we had been collecting items, and publicizing the event via posters and social media. Several people had donated items for sale, clothes in particular. Transport was arranged, as was the hiring of a sound system. Now what? Where on earth could we go?

“How a cow catches a hare” (a Dutch expression)
But life has a way of running its own course, not always our planned course. And when you are open to that, life may surprise you. I knew the mother of my dentist well as she was an active member of the Roman Catholic Church. So when I arrived at their home, I asked her for the phone number of the responsible person for the Catholic Church. She did not have it, but her daughter did and gave it to me. I rang padre Paul, explained the situation, asked for the space beside the cathedral, and in less than 5 minutes it was arranged! Even before I saw the dentist, I was able to ring a hugely relieved Ana Alicia, who got the organisation of the flea market going. So the flea market did happen, only a little bit delayed.

Implementation
The pictures below tell the story of the day. The activities club worked that day to promote the work of our Foundation. They produced some piñatas, and also piggy banks, and flowers made from plastic bottles. We were able to borrow some gazebos to protect us from sun or rain; others helped with paying for hiring the sound system. Again it was a joint effort and we reaped the harvest. The financial gain of about $150 was modest, but it was $150 more than we had at the beginning of the day. Moreover, we got in touch with more people who now know about our work. So we are in good spirits as we plan to sell the remaining items, and soon too! We keep on moving forward.